The League of Women Voters is a community-based organization that has fought since 1920 to improve our government and engage all citizens in the decisions that impact our lives. The League is nonpartisan, which means it neither supports nor opposes candidates or parties. 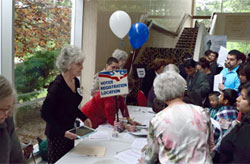 Formed from the movement that secured the right to vote for women, the centerpiece of the League’s activities remains to expand participation in democracy and give a voice to all Americans.

The League of Women Voters, a nonpartisan organization, promotes political responsibility through informed and active participation of citizens in government and takes action on selected governmental issues. The League does not support or oppose any political party.

The League of Women Voters believes in representative government and in the individual liberties established in the Constitution of the United States.

The League of Women Voters believes that democratic government depends upon the informed and active participation of its citizens and requires that governmental bodies protect the citizen’s right to know by giving adequate notice of proposed actions, holding open meetings, and making public records accessible. The League of Women Voters believes that every citizen should be protected in the right to vote, that every person should have access to free public education that provides equal opportunity for all, and that no person or group should suffer legal, economic or administrative discrimination.

The League of Women Voters believes that efficient and economical government requires competent personnel, the clear assignment of responsibility, adequate financing and coordination among the different agencies and levels of government.

The League of Women Voters believes that responsible government should be responsive to the will of the people, that government should maintain an equitable and flexible system of taxation, promote the conservation and development of natural resources in the public interest, share in the solution of economic and social problems that affect the general welfare, promote a sound economy and adopt domestic policies that facilitate the solution of international problems.

The League of Women Voters believes that cooperation with other nations is essential in the search of solutions to world problems, and that the development of international organizations and international law is imperative in the promotion of world peace.

November Virtual Listening Tour.  The Legislature’s House and Senate Redistricting committees will jointly conduct a series of virtual Town Hall meetings November 22, 23 & 29, 30.  All of the meetings will run from 5:30 PM to 7:30 PM.  The locations are arranged by Congressional district.  Anyone wishing to provide oral testimony must notify Kansas Legislative Research Department staff at least 24 hours in advance of the meeting in which they wish to testify.  Notice is to be provided by contacting the Kansas Legislative Research Department at redistricting@klrd.ks.gov or 785-296-3181.  See details on the KLRD Redistricting page here.  Check back often as KLRD posts updates on that page.