Every Year is an Election Year! 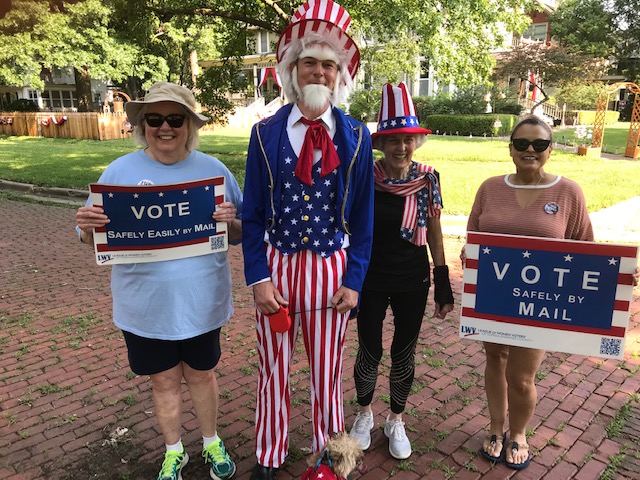 August 3 was the primary election for municipal and school board offices that will be filled at the November 2 General Election.

Often these local elections don’t get as much attention as state and national elections because the districts cover only small portions of the county and campaigns are generally not well funded. So, it’s up to all of us to dig in and educate ourselves about the issues and the candidates and encourage our friends and neighbors to do likewise.

Depending on where you live in the county, you will vote for municipal governing bodies – mayors and city council members and local school board members. See the list Shawnee County Election Office’s list of candidates.

See Vote411.org for information from the candidates.

The League of Women Voters across the nation is working on a redistricting program called People Powered Fair Maps to encourage every state to create fair maps during this round of redistricting.  Of course, fairness is always a matter of perspective, but the League is most interested in its core value of being sure that every voice is heard in the democratic process.

Learn more about how you can get involved in this important work.

As with all the League’s work, we encourage community members to work together and stay engaged with their elected representatives.  Watch the Fair Votes Fair Maps page and the LWVTSC Facebook page for events and more information.

Our League continues to meet and upcoming events will be announced as finalized. The public is invited to attend any of these events.

TOPEKA, KS – The League of Women Voters of Kansas expressed its disappointment with the Friday evening release of the Kansas House and Senate Redistricting Committees’ “Listening Tour” scheduled for Aug. 9-13. The scheduled “Listening Tour” is in preparation for the 2022 round of redistricting.

“We’re disappointed that the Legislative Redistricting Committees released the “Listening Tour” on short notice and that it will be conducted in a single week,” said Martha Pint, co-president of the League of Women Voters of Kansas. “We’re also concerned the ‘Listening Tour’ is being held prior to the Census Bureau’s release of the detailed population counts that are needed to draw new districts.”

In contrast, the hearing schedule in 2011 covered the same 14 cities from July to October.  (Read the release at LWVK.org)

TOPEKA, KS – The League of Women Voters of Kansas sent a letter to both the Kansas Senate and House Redistricting Committees advocating for the public’s participation in the upcoming redrawing of district voting boundaries.

Martha Pint, Co-President, said, “The League is committed to ensure that Kansans have the opportunity to provide input at public gatherings and hearings, to have their voices heard on Legislation that impacts them.” (Read the release at LWVK.org)

TOPEKA, KS – Today, the League of Women Voters of Kansas, Loud Light, Kansas Appleseed Center for Law and Justice, and the Topeka Independent Living Resource Center filed a motion for temporary injunction, asking the Court to bar the state from enforcing its newly enacted “Voter Education Restriction.” The new law makes it a crime to engage in conduct that “gives the appearance of being an election official” or “that would cause another person to believe a person engaging in such conduct is an election official,” effectively chilling the ability of organizations like the plaintiffs to provide voters with information and assistance in casting their ballots. (Read the release at LWVK.org)

TOPEKA, KS – Today, the League of Women Voters of Kansas, Loud Light, Kansas Appleseed Center for Law and Justice and the Topeka Independent Living Resource Center filed a lawsuit challenging newly enacted voting laws in Kansas that will make it more difficult for Kansans to vote. House Bill 2183 and House Bill 2332 violate the Kansas Constitution by interfering with Kansans’ voting, due process and free speech and association rights. (Read the release at LWVK.org)